1- Works with Incoming Kindergarten Students– I am working with special education students in my summer program so they have a various levels of ability and skill but anyone can get something out of this app.  The app features 26 printed flashcards for every letter of the alphabet.  You can print out the flashcards and the 2-D version which features a picture of an animal for every letter of the alphabet.  The students scan the pictures with an app that can be downloaded on the iPhone or iPad.  Kindergarten students are learning letter recognition.  When they scan the flashcards with the app a 3D version of the animal pops up.  When the students touch the 3D animal the animal name comes out in the audio.  The kids are delighted.

2- Works with Incoming 1st Grade Students- The students who I have who are entering the first grade still need to practice the sequence of the alphabet.  I chunk the alphabet into 4 letter blocks, when the students tell me the correct four letters in a row then they get to look at the 3-D Flashcards as a reward.  If a student forgets the letters then I use the printed out 2D flashcards as a means of prompting them.  They were so excited that they were literally jumping out of their seats.

3- Working with Incoming 2nd&3rd Grade Students- These students still benefit from practicing the alphabet sequence and with this age group you can do the activity as a pair share. In the picture below you can see that I have the incoming 3rd grader using the iPhone to scan the flashcards while the incoming 2nd grader is touching the 3D Augmented Reality image to activate the audio prompt. 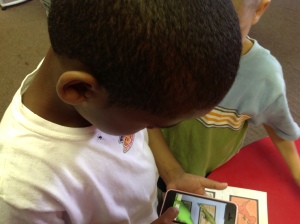 4- Working with Incoming 4th Grade Students: While the alphabet AR flashcards are not appropriate for this group that I have, AR makes a great bonus feature.  In addition to the alphabet AR flashcards they also make six dinosaur flashcards which the 4th graders love.  It helps the students practice pronunciation and is a great “hook”.  When I asked my class if they liked dinosaurs and they all screamed “YES”, I knew this would be a great way to engage learners.  Then we were able to transition to a Lino It wall in which they had to post different facts about dinosaurs on stickies.

5- Working with Incoming 5th Grade Students: When I left the elementary school building and brought my AR flashcards up to the middle school I was not sure what the response would be.  Even the students who were not curious about the dinosaurs became so curious about the augmented reality technology that the lesson evolved into a discussion about augmented reality and QR codes in our culture.

5 Great Reasons — One Great APP — If the Folks Who Made the app are reading this, keep the content coming baby!!!

Here is a link to FREE APP in the iTunes Store