I like that the  iPad creates opportunities as it builds cultural bridges and breaks down barriers in the classroom.  My high school students are completing a project based learning style competition that is modeled after Donald Trump’s Celebrity Apprentice.  Since The Apprentice takes place in New York City, our semi-final challenge had the contestants research a New York City neighborhood on their iPads and then express the findings of their research in a live installation in the classroom.  Each group was given a $20 budget to buy props to support their installation. 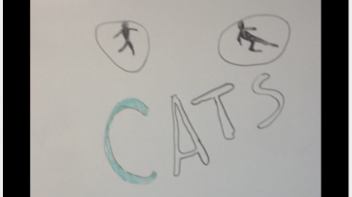 One of the groups chose to create the Theater District neighborhood in the classroom.  When the judges came into the classroom the students had used their iPad research to help them draw visuals from the neighborhood.  Also, their was a technology integration portion to the contest: my students found a video of the musical CATS that they had playing on one iPad, next to a Keynote created about the Theater District, while another iPad displayed a stunning visual of a B Way Theater.  My student also placed popcorn, cotton candy, and ices in a beautiful display in front of their bevy of iPads.  They were also able to print 42nd ST. signs and other stunning visuals from their iPads. I was super impressed with my students intense level of focus and motivation as they transformed my classroom by decorating for the competition.  Also, when viewing the project the judges were amazed that only one student in the class had spent time in New York City.  The iPads give our young people eyes to see the world and open multiple doors of opportunity.  My class was happy to take this virtual trip to the Big Apple.  Mr. Trump if you are reading this please contact us/Tweet us for our final round next week.  It would mean so much to my students.